Welcome To Watch French Open Tennis 2018 will be taking place from Sunday, 27 May 2018 to Sunday, 10 June 2018 in what will be a two week grand slam stint in Paris, France. Authorities has announced extensive coverage plans in over 200 countries around the world. In Europe, EuroSport 1 and 2 will continue to broadcast French Open in most of the countries in local languages while NBC and ESPN to share coverage of Roland Garros 2018 in USA.So keep watching and enjoy your time. 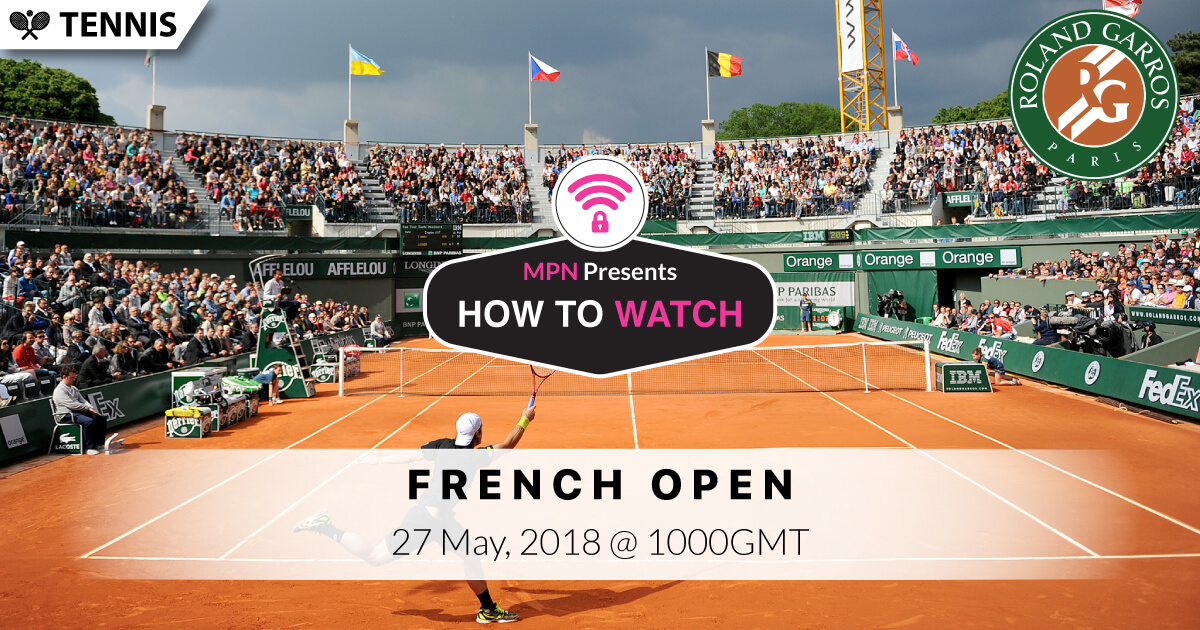 The second Grand Slam of the year welcomes all the best of the tennis world to Roland Garros once more when the 2018 French Open begins on Sunday 27 May.Twelve months on from an unpredictable 2017 edition, defending French Open champions Rafael Nadal and Jelena Ostapenko lead the field when the stars start assembling in Paris once more for another tilt at a famous title.Arguably the high-water mark of a superbly resurgent season which saw him reclaim the world no. 1 ranking, Nadal’s progress through the draw at Roland Garros in 2017 proved that reports of the ‘King of Clay’s dethroning were wildly exaggerated. The Spaniard smashed every opponent he faced without dropping a single set, beating Pablo Carreno Busta in the quarterfinals and Dominic Thiem in the semifinals before thumping 2014 champion Stan Wawrinka in the final to claim a stunning tenth Roland Garros crown – ‘La Decima’. Nadal would go on to win the US Open, among other accolades, in 2017 and ended the year on top – but the climax of his season was clouded by injury. Have we already seen the best of Rafael Nadal at Roland Garros, or will the greatest player the French Open has ever seen write another chapter in his story in 2018?Joining Nadal when the 2018 French Open begins on Sunday 27 May will be two former champions: 2016 champion Novak Djokovic and 2014 winner Stan Wawrinka, who will both be making comebacks from injury difficulties in 2018 and might just have found their best tennis by the time the French Open comes around.
Grigor Dimitrov is out to use his Nitto ATP Finals victory in 2017 as a springboard to major glory, while Dominic Thiem has made the final four in Paris each of the past two years and might just be Wawrinka’s natural successor on clay – and Alexander Zverev has proven himself capable of winning massive titles on clay. And that’s not even counting the much-improved David Goffin, Jack Sock or Pablo Carreno Busta – or French favourites Jo-Wilfried Tsonga, Gael Monfils and Richard Gasquet.
Jelena Ostapenko in 2017 made one of the most incredible Grand Slam breakthroughs tennis has ever witnessed as the unseeded Latvian teenager, ranked world no. 47, found a rich vein of form which brought out the best in her fearsome power game. The Latvian had to come back from a set down five times over the fortnight, but posted increasingly impressive victories over Samantha Stosur, Caroline Wozniacki and Timea Bacsinszky before she pulled off a sensational comeback from 4-6, 0-3 down against Simona Halep in the final to relegate the Romanian to her second runner-up finish. Audacity and fearlessness were the hallmarks of Ostapenko’s 2017 run – can she channel the same qualities as the defending champion in 2018?
Simona Halep, now a two-time runner-up at her best Grand Slam, took a huge stride forward in 2017 when she reached world no. 1 and will be out to make the French Open final for a third time, while 2015 Roland Garros champion Garbine Muguruza – herself now a former world no. 1, too – looks to add a third Grand Slam title to her haul after dazzling at Wimbledon in 2017. French hopes will be focused on Kristina Mladenovic and Caroline Garcia, the former doubles partners who each made immense progress into the game’s upper echelons in 2017 after dissolving their partnership, and Elina Svitolina, Karolina Pliskova – a semifinalist in 2017 – and CoCo Vandeweghe all proved that they can seriously compete on the Grand Slam stage.

But the focus on the women’s side at the 2018 French Open will be on the return of two of its great champions. Three-time winner Serena Williams, now a mother and the winner of most Grand Slam titles in the Open Era, will be out to reclaim the title she most recently won in 2015, while two-time champion Maria Sharapova has a point to prove after her suspension for doping violations, which saw her miss Roland Garros in 2016 and 2017 – and the French Open is the place where she has the best chance of doing so. Rivalries resumed, the return of big stars, new generations jostling for a major breakthrough and two contrasting but intriguing champions defending their titles tooth and nail – the 2018 French Open is set to be a fascinating, gladiatorial battle stretched over two weeks from Sunday May 27 to Sunday 10 June.

About the French Open

The second Grand Slam of the year is one of the most gruelling and demanding of the tennis season – if not the most demanding for the men, who must compete in best-of-five set matches for a fortnight on the most endurance-requiring surface in the game.The French Open – otherwise known as Roland Garros, named after the Stade Roland Garros, where the tournament has been held since 1928 – has a long and complicated history. This has seen the tournament change locations and identities multiple times since its founding in 1891. Before 1925, the tournament was open to members of French tennis clubs only, and named the Championnat de France. Originating as a men’s event alone, a women’s tournament was added for the first time in 1897 – with doubles tournaments beginning to be added in 1902.As the Championnat de France, the event changed both location and surface several times over. Initially, it was contested in Puteaux, and played on sand laid out on rubble. In moving on the the Racing Club of France, Paris, it changed surfaces to clay, and remained as such throughout periods of time spent in Bordeaux and Auteuil (Paris.)After a couple more venue changes, the tournament finally came to rest at the Roland Garros stadium in 1928 – the year it officially became a Grand Slam tournament.Over with the women, the legendary Suzanne Lenglen won the most titles before the Open Era,In recent years, the reign of Rafael Nadal, which saw him win nine of ten years between 2005 and 2014 (the exception being 2009 when he suffered a shock defeat to Robin Soderling, creating an opening for Roger Federer to finally complete his career Grand Slam), was suspended by titles for Stan Wawrinka in 2015 and Novak Djokovic in 2016 before Nadal returned in triumph in 2017, capturing ‘La Decima’ – a tenth title – without dropping a set despite facing Wawrinka in the final. On the women’s side, recent years have seen Maria Sharapova (2012, 2014) and Serena WIlliams (2013, 2015) ending a string of one-time champions which included Ana Ivanovic, Svetlana Kuznetsova, Francesca Schiavone and Li Na, while Garbine Muguruza became the first Spanish woman since Arantxa Sanchez Vicario in 1998 to lift the Coupe Suzanne Lenglen when she claimed her maiden Grand Slam title at the 2016 French Open and Latvia’s Jelena Ostapenko, just 19 years old, became the first unseeded player in history to win the crown when she captured the title in 2017, defeating Simona Halep in the final.Subcribe Now
French Open Tennis 2018 Live Streaming 2018-05-28
sohel
Previous: ((Game 7)) Cavaliers vs Celtics NBA Live Streaming
Next: France vs Ireland Live Streaming